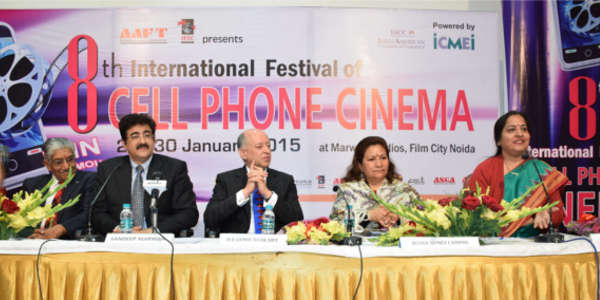 “What a unique and different kind of festival. I am amazed by the energy in this campus when it comes to promotion of films, art and culture business is concerned” said H.E. Jaime Nualart Ambassador of Mexico on the inauguration of 8th International Festival of Cellphone Cinema at Noida Film City.

“Sandeep Marwah efforts to establish film city in the North of India has brought colors to the whole nation. I would like to be the part of more activities of Marwah Studios” expressed Rekha Rani Social Worker & Municipal Councilor.

“Promoting other arts like Tarrot reading, paintings and photography exhibition has broadened the size of the festival” said Chandani renowned Tarror Diviner

“We have grown in 8 years. This time we have received more than 600 entries from all over the World” added Sandeep Marwah President of AAFT. Few films shot on mobile were also screened.

Later Sandeep Marwah honored H.E. Jaime Lunalart and other guest with the life membership of International Film And Television Club.

8th IFCPC brought two countries close To Each Other

The second day of 8th International Festival of Cellphone Cinema brought two countries India and The Democratic Republic of Congo close to each other when the Ambassador H.E. Balumuene Francois announced to work together with ICMEI in the field of Art and Culture.

“We will work together in different angles as far films, television, media, art and culture is concerned” said H.E. Balumuene Francois on the screening of films made by mobile and presented by International Film And Television Club at Marwah Studio.

“I am surprised to see the growth of Noida Film City in these years and want to give credit to Sandeep Marwah who has been devising new ideas to keep Noida Film City in lime light” said Vijay Kumar Handoo former Director of Doordarshan, Ministry of Information And Broadcasting Government of India.

“I am ready to contribute to any extent as far as business and growth is concerned,” added Atul Kumar President Importers Association of India.

Sandeep Marwah President Asian Academy Of Film And Television & ICMEI announced a film as joint production between the two countries. Later Marwah honored H.E. Francois Baluemne and others with Life Membership of IFTC.