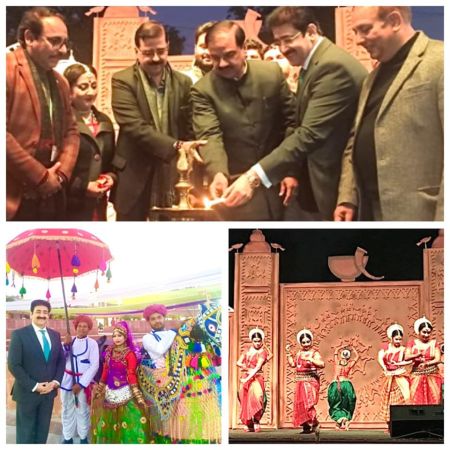 Noida: “I congratulate each and every one associated with this six days Atulya Bharat Art And India Cultural Festival. In Noida Hut which has added a new cultural life to the people of Noida. Art is the best way to express,” said Dr. Mahesh Sharma while lighting the Ceremonial lamp at the inauguration function.

Such as “Culture can mean many things: it can be your language, your food, your clothing, your religion, etc. Here at Cultivating Culture, however, we cherish the aspect of culture that inspires: we love the arts. We highlight museums, galleries, organizations, and individuals that have dedicated their lives to supporting the arts. We celebrate the facet of humanity that has brought that such as  “order out of chaos,” and we invite you to join, or to enjoy,” said Dr. Mahesh Sharma Member Parliament Noida and Former Minister of Culture and Tourism, Government of India.

That Such as “Art is the true picture of the minds. A country as diverse as India is symbolized by the plurality of its culture. India has one of the world’s largest collection of songs, music, dance, theatre, folk traditions, performing arts, rites and rituals, paintings and writings that are known as the ‘Intangible Cultural Heritage’ of humanity,” said Dr. Sandeep Marwah President of Marwah Studios. India Cultural Festival In Noida.

The festival started with the dance recital of Jyoti Srivastava and group. Many prominent people from Noida were present there including Classical  such as dancer Anu Sinha Art promoter Ashok Srivastava, Yog Master Gopal Ji, Radio Noida Head Sushil Bharti at the inauguration of the festival.

AAFT- Asian Academy of Film And Television, ICMEI-International Chamber of Media And Entertainment Industry are partners in progress. Radio Noida 107.4 FM and MSTV will support the festival.