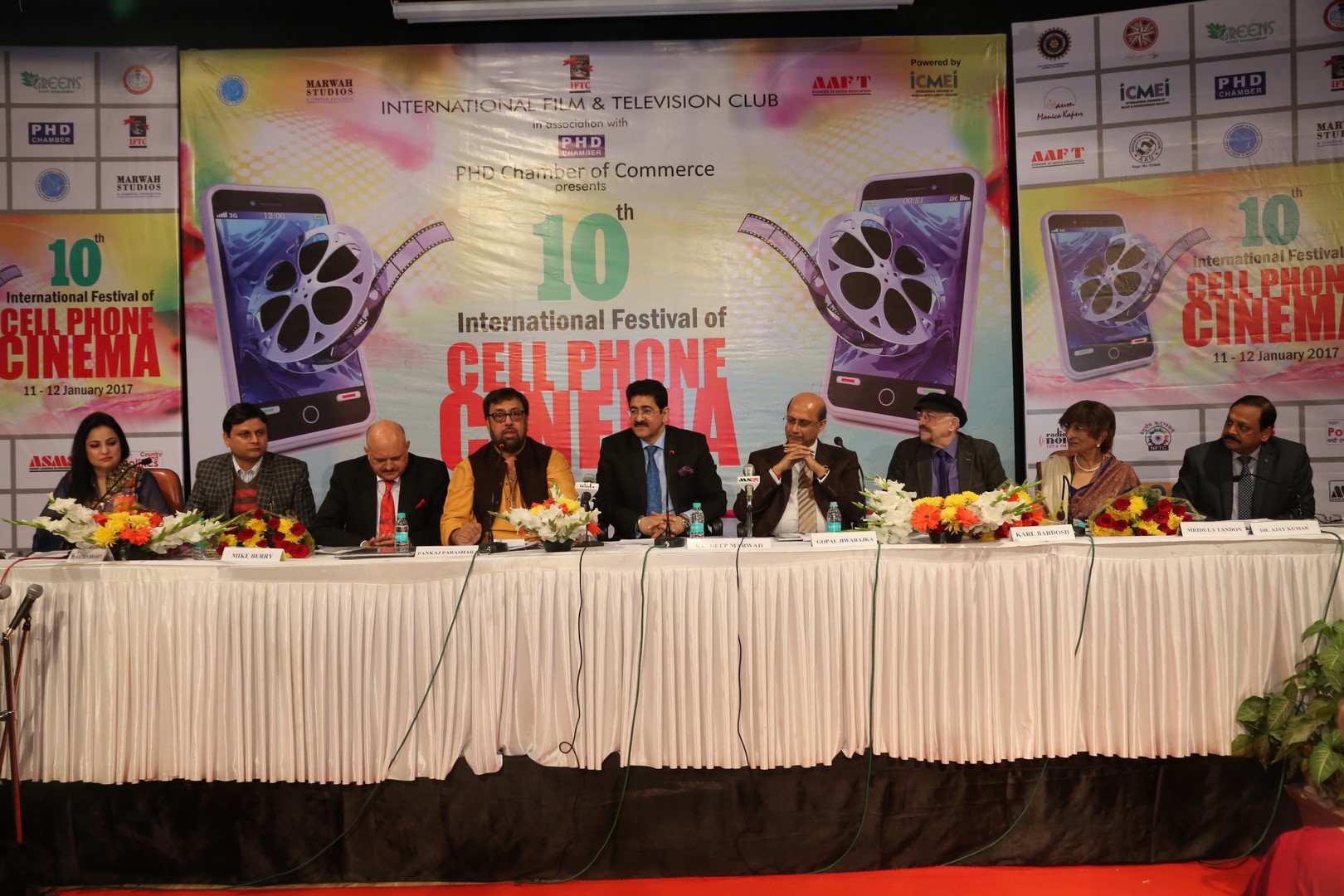 The premier film School of India AAFT- Asian Academy of Film And Television will support 9th International Festival of Cellphone Cinema 2016 to be held on 29th and 30th of January.

The 12000 students of AAFT and ASMS- Asian School of Media Studies have been informed to participate in the most interesting film festival of the World where all these former and current students can also participate by submitting their entries in the competition.

The film, television, media, tourism and hotel management, multi media, and fashion students have started planning for their participation in this festival where there is no cost of participation.

They have to submit the films shot by mobile phone or stills clicked by mobile phone. There are different categories and jury will decide for the best stills, music video, fiction and Digital News Gathering 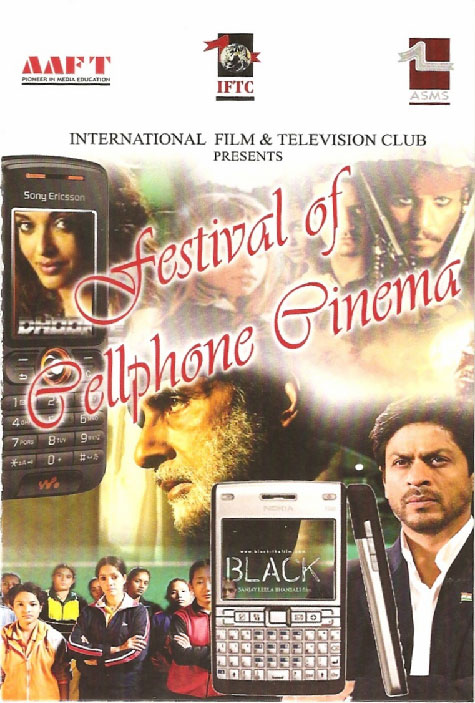 A writer, producer, director in Hollywood and a Professor with Tisch school of Arts, New York Prof. Karl Bardosh co-produced mini-dramas in India along with Sandeep Marwah, Director AAFT. After the success of the Cell Phone Cinema, Together they announced A Festival of Cell phone Cinema at AAFT. Sandeep Marwah said,’’ What’s exciting about the rapidly improving technology is that people can generate their own content and find new ways of sharing it. Compared to the traditional modes of visual storytelling, it’s very spontaneous and very quick and technically pretty easy to do, and we want that the budding film makers should take full not of this exciting technology.

The launch of the festival was conducted by famous bollywood actress Neetu Chandra, who has vowed the audiences and the critics by her performance in films like Garam masala and Traffic Signal. On this occasion Prof. Karl Bardosh , who is currently in India for a special session with students of AAFT & ASMS, exclaimed,’ Its high time that storytelling becomes novel’’. 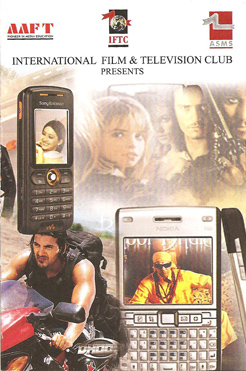 After introducing for the first time in India the Festival of Cell Phone Cinema, AAFT created the history again. The Festival had participants from all over the world including countries like USA, Iran, Bhutan, Iraq, Haiti, Kazakhstan, Dominica, Malaysia, Nigeria, Kenya etc…Receiving 53 entries, though it was difficult for the judges to finalize the winners , they came up with four winning films.

The ceremony saw a huge gathering of professionals from all walks of life; the crowd was both enthusiastic and anxious as to how mini dramas would come out. As the winning films were screened, there was a huge round of applause and cheering from the audience. Present on the occasion, as the chief guest was Mr. Shantanu Das, CEO & MD Mospay InfoTech India Pvt. Ltd with the guest of honor Mr. Raj Krishan Mishra, Producer, Director & member of U.P. film development council and Mr. Rahul Mitra, CEO Brandsmith. The benign guests were delighted to handover the Camera Cell Phones as the prizes for the winners. Mr. Sandeep Marwah expressed his contentment on the grand success of the show and said that he will keep on giving his students chances like this to show their talent. It was also declared as an annual International event by Mr.Sandeep Marwah.

The leading lady of the feature film Assma and successful actress of a large number of Hindi movies Hrishita Bhatt advised the aspiring actors to prepare themselves for giving a wide range of performance. Begin somewhere and keep learning and improving all the time she added. The young, beautiful and talented actress with great screen presence together with the Hero of the film Shubh were interacting with the students of Asian Academy of Film & Television, Asian School of Media Studies and Asian Business School at Noida Film City.

Answering questions Shubh said that filmmakers indeed have a great opportunity to communicate with the masses and to convey message laced with entertainment. He was the view that each film could deal with at least one cause for the elimination of evils prevalent in the society and to make it a happy, healthy and balanced one. Asserting that by and large films are inspired by the life around us, Shubh said his first film Assma is a real life drama. The producer of the feature film Shakti Mukherjee said that talented and passionate film professionals could create their own space in the show world even without a god father. Addressing the large gathering on this occasion Atul Vyas of Indo-American Chamber of Commerce said that the initiative taken by Sandeep Marwah to promote cellphone cinema really ahead of time. Cellphone and the related technological developments have enabled every citizen of the world to make and watch movies anywhere and at anytime he added. Vidhant Kannoi of Bathbuzz.com, Harsh Narayan of Dragon.com and Shantanu of Gurujee.com also shared their views with the audience on the potential of cellphone cinema. Subhand Hrishita Bhatt were made the life members of the prestigious International Film & Television Club on this memorable occasion.

President of Indian Motion Picture Producers Association and a well known educationist T P Agarwal said that lack of in-depth knowledge of film production on the part of multinational and their over enthusiasm to venture into it had generally been unhelpful to the industry. He further said that improper understanding of various aspects of film making has resulted in the production of largely unsuccessful films in the recent past. Unrealistic cost of production of the films financed by the multi nations has indeed set bad precedents in the industry,

he added. President, IMPPA was participating in a seminar organized by President of Asian Academy of Film & TV, Asian School of Media Studies and Asian Business School Prof Sandeep Marwah on the occasion of 2nd International Festival of Cell phone Cinema at Noida, Film city. Voicing his concern over unusually large number of feature films awaiting their release, T P Agarwal advised the film producers to choose good subjects for screen presentation. He was of the view that attempt to exploit baser human instinct does not pay at the

box office and therefore depicting vulgarity in the films unnecessary. Answering a question put to him by the students T P Agarwal said that film making is not all that simple or fun and that it needs hard work on the part of a team of trained and experienced creative people. Well known film and television writer/directors A S Bedi and Prasan Sinha also shared their experience of and views on the film making and television production, with the students. President of Indian Motion Picture Producers Association accepted life membership of the prestigious International Film & Television Club on this memorable occasion.

Colourful flags ,posters ,hoarding, large gathering of young enterprising and energetic crowd in the campus of Asian Academy Of Film And Television at Marwah Studios Complex made the whole Noida Film City vibrant with the 2nd International Festival of Cellphone Cinema especially on this 7th and closing day of the festival. The international guest Kurt Inderbitzin ,renowned film producer from Hollywood,said,” I am proud to be associated with innovative people,

you never know who may give one unique idea while making Mobile Cinema to the best producer of this industry.” Another International jury member Prof Karl Bardosh of Tisch School Of Arts, New York University, who was talking to the audience through internet expressed and explained the need for Mobile Cinema. “Have confidence and conviction people will understand you in no time” ,said Industry Pundit renowned film Writer and Director Rahul Rawail known for his films like Betab, Love Story, Arjun, Arjun Pandit ,Khuch Khati Kuch Mithi etc joined on the jury bench with another Industry Giant Pankaj Parashar, largely known for his films like Jalwa,ChalBazz, Aasman Se Gira ,Himalaya Putra, ect to assess more than 400 entries received from all over the World for 2nd International Festival of Cellphone Cinema.” I am not emphasizing on the techniques but I can say that these films are made by heart ,I can see emotions in all the films.”said Pankaj Parashar. .Rajjat Barjataya of Rajshri.com added the young spirit to the Jury. He replied to all the technical questions asked by the national press. “All entries will get participation certificates,15 top still shots and 11 short films are the recipient of consolation certification. US Dollar 2000 will be awarded to the winners.”said Sandeep Marwah International President of Asian Academy Of Film And Television during the function.”I am expecting 140 million people will be able to watch cinema on Mobile in next three years in India.”Marwah added. The function ended with special thanks to the partners The Film and TV Producers Guild of India, Batchbuzz.com, Dragon.com, Rajshri.com, Times Broad Band and, 1takemedia.com, Shivkala Motion Pictures, International Film And Television Club by Akshay Marwah director of the festival.

Dinesh Raj Methuku
Sunset – Amazing sunset at my town, the timely capture of the fisherman rafting through the dusky sun rays, shot by my Nokia N93[/one_third_last]

Kamal Mahrshi
Death Carrier can die too – this was a sight to watch, this van must have carried a lot of dead bodies and now see its dead itself.[/one_third]

Nelu Sherpa
Expression – This was taken in a local school in a small village at the feet of Mt.Everest. Regardless of what is happening around them they show happiness in their own innocent way.[/one_third_last]

Ritika Negi
Rainy Showers – It was raining on June 5, 2007 at 4.00 p.m. when I was in Ranikhet. Suddenly, I saw towards north. I was dumb bound to see the beautiful scene of rain showers falling from the clouds. I immediately captured this scene in my
[/one_third]

Vipul Arora
Roots – Indian Flag describes prosperity, peace, culture so does this photograph in which you can see a flag. The train for motion as keep walking towards its aim, white clothes for peace and last but not the least cow dung cakes on the wall which tells us earthiness.[/one_third_last]

Moving Beyond Words – The film Moving beyond words is as audio-visual exploration into the mental state of a war photojournalist who has been haunted with his war assignments, the images of destruction, killings, terror.[/one_third]

The Gift by Amar sohny 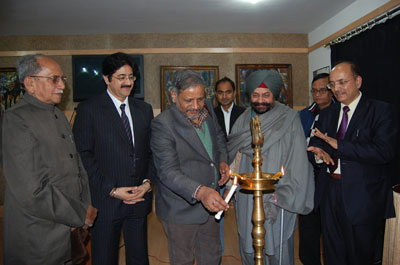 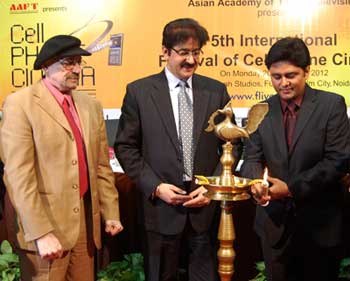