Being one of the Top10 best Film schools, AAFT keeps upgrading itself. In another advancement program, the faculty of AAFT in the headship of the Director Sandeep Marwah, launched a personality development program as a value addition to the regular courses.Prof. T.S Bedi , Dean Business School, Dean AAFT. Ass. Dean AAFT, Prof. A.K Goorha, H.O.D Camera Department took an initiative and guided students on personality development. Renowned personalities will be talking to the students in the coming weeks on the same subject.

The creative geniuses and performing artistes in the making at INIFD and AAFT worked hard to recently organize ADAA’ 08 The Fashion show of Gennext at Marwah Studios Complex in Noida Film City. While the INIFD students showcased their designs under contemporary, ethnic and creative categories, the students of AAFT participated as models in a largely attended glittering ramp show. Admiring the work of the students of the two renowned institutes Prof. Sandeep Marwah said that the dress makes or mars the appearance of a person and the offices and residences must not only meet the functional requirements but they should also be aesthetically pleasing.He commended the good work being done at INIFD to hone the skills of budding fashion designers and interior decorators. Ms. Jyoti Khera, Centre Director said that she is happy that the two elite institutes could bring out the talent in open.

With the view of keeping the relationship strong and expanding the learning boundaries between the two esteemed institutions, a group of 13 students from Winchester University visited AAFT under the student exchange program. The group is here to make two of their graduation films with AAFT.
Mr. Sandeep Marwah, himself addressed the group and introduced them to Indian Cinema. The students were eager to observe a new culture and get glimpse of Indian Heritage during their visit. They had a walk around the campus and met the students of AAFT. Enthralled by the greenery and environment of the Film City, the students were all set & excited to start their films.

The major creed that India looks up to is films today. It believes what is shown and is rapt by the glamour. Films like “Taare zameen Par” leave their mark and a message so clear, that it’s our responsibility to bridge the gap between the upbringing of our kids & special kids. Keeping this in mind the biggest institution that has provided the media industry with 5000 media professionals, Asian Academy of Film & Television attempted to bring awareness on Disability through WeCare Film Festival. AAFT along with Brotherhood, an organization run by Satish Kapoor is working for several years intended for the welfare of the disabled, organized this festival to create awareness about people with various disabilities and how to help them become independent. The festival Received 47 films from all over the world, out of which four films of 1 min were previewed at the opening. “Media is a very powerful medium of communication. In India, films are the best channel to create awareness about disability.” said Sandeep Marwah, Director AAFT, who was present on the occasion as the guest of honor along with H.E. Mr. Mark Sofer , Ambassador, Embassy of Israel ,Subodh Lal, Film Educator, Dr. Sundeep Khanna, Addl. Sec. Ministry of Social Justice & Empowerment, Philip O’Keefe , Lead Social Protection,World Bank , M.K Raina, Producer/Director & Satish kapoor, Director, Beotherhood. Dr. Sundeep Khanna expressed his desire to take the festival of films on disability all over the country, just to make India a better place for these people to live. Mr. Sandeep Marwah appreciated his initiative and proposed to promote the festival through Noida filmcity.

The Man behind hit films like “Hanuman Returns”, “No Smoking”, “Black Friday”, “Paisa Vasool” , “Paanch” , “Nayak: The Real Hero” , ANURAG KASHYAP visited AAFT recently. The reason behind the planned visit of the famous Writer- Director of Bollywood was an interactive session with the students of AAFT. Giving a quality time for the tête-à-tête session, Anurag kashyap obliged the students. He patiently listened to their queries and anxiety related to Bollywood and answered each one of them Sandeep Marwah thanked him for giving his valuable time and sharing his priceless experiences with the students. Sandeep Marwah Said that none other than a person from Bollywood can give a clear picture and show the right path to the budding film makers and with so many hits in his kitty, Anurag is the correct person. Students were thrilled and all charged up after the session.

Asian Academy of Film & Television maintain its tradition of promoting Art, whether Film & television or Painting. It has given opportunities to many artistes via MEC Art Gallery. Sandeep Marwah , Director AAFT, inaugurated yet another painting exhibition as a guest of honor along with Chief Minister of Delhi Sheila Dixit in a recent event held at The Experimental art Gallery.
The Paintings based on the beauty of Himalayas & Nature were the works of the renowned artist Deepa Seth who is a Post Graduate in fine Arts. Sandeep Marwah found this exhibition unique and said,” These paintings are so authentic that each one of them takes me closer to Nature.” Adding up to the praise Shiela Dixit said that artist has shown the Nature beautifully. The occasion had generals from the Indian army with some other well known personalities.

A Premiere Art and Media Academy of USA, The Academy of Art University joined hands with the Premiere Art and Media Academy of India, Asian Academy of Film & Television. With the visit of delegates from the Academy of Art University, Ms. Mia Kim & Ms. Sori Kim, an abiding rapport between two pioneer media educators was strengthen.
The two delegates came to India just to visit the Academy whose applause they have been listening back in USA. Impressed by the infrastructure and the quality of training given by the Academy Ms. Mia Kim & Ms. Sori Kim spoke to the students about how difficult the media training is and that they were in the right place. Mr. Sandeep Marwah thanked the two respected ladies and offered them with the life membership of International Film & Television Club.

A Product of Masters from Michigan University and a Doctor in Literature from Purdue University, Dr. Raman .K Singh took a workshop on Creative writing with the Students of AAFT. Already a visiting faculty with Virginia University and a writer, he had just finished writing a script named ‘OPPA’ for Famous Hollywood producer Elliott Castner, who has given hit films like, Where the Eagles Dare, The Night of the Following Day, Man, Woman and Child, Sweet November and many more…Talking to students at length, the writer gave students the modus operandi for scriptwriting.He also organized a premiere for his movie at the Campus as a part of the workshop. Students were glad to have such an eminent personality as their Professor. 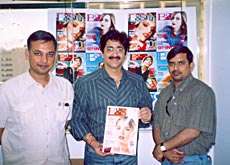 Vice chancellor of the University of Media Arts Sandeep Marwah was recently invited by the UAE Government to the Dubai Media City for an international cultural exchange program. During the visit, Prof. Marwah was also invited by the managing editor of Dubai’s hottest selling magazine titled Beauty & Style and inducted as its Media Advisor from India, which he gladly accepted. Seen in the picture enclosed are Managing Editor B & S, Vigyan Arya and its Art Director Ahmed Naved flanking sandeep Marwah in the center.

Sanjay kapoor, The Renowned Cine Star, dazzled the inaugural ceremony of 58th batch of Asian Academy of Film & Television with his presence recently. The star shared his experiences both good & bad which he came across during his career. After the ceremony, he wished students good luck and said that it’s the hard work put in which pays at the end of the day. The proud Sandeep Marwah said that almost 5000 AAFT alumni are already working in the Industry and promised to deliver professionals with same enthusiasm.The 58th Batch saw enrollments from countries like USA, Kazakhstan, Heiti, Nigeria Malaysia, Belgium, Dominica, Netherland etc Sandeep Marwah was confident that a rendezvous with a star at the beginning of the session will help student to learn a lot about the Film Industry. Talking about films at length with students, Sanjay Kapoor said that only those can survive who has passion for Media and that is what AAFT injects into you. He also added ,’’I am happy to note that now AAFT is the 3rd biggest Film Schools in the world as far as enrolment is concerned.