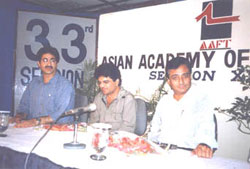 The erstwhile popular child artist of Indian films and now a film producer-director, Junior Mehmood addressed the students Asian Academy of Film & television and regaled them in his characteristics style.He had made his debut in the feature film Brahmachari.Complimenting Prof. Sandeep Marwah for providing excellent need based film education and training he said that due to skyrocketing cost of production,it is no longer possible for the film industry to make use of untrained people.Answering question put to him by the students the distinguished visitor said that he keeps smiling to overcome the stress and strain of mastering the intricacies film making and achieving success in this field of performing arts.Junior Mehmood was accompanied by the renowned event manager of Mumbai Bhushan Khandhari 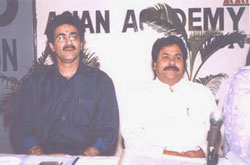 Well known journalist and member of parliament Rajiv Shukla said that India is indeed a reservor of talented artists.He added that one has to dive deep to locate the priceless pearls.The honable member of parliament was formally releasing the album of devotional songs of well known singer Ujjawala Sharma in Asian Academy of Film & Television.Rajiv Shukla stated that the entertainment business is all set to cross fifty thousand crore mark and very large number of trained and competent artists and technicians are required to sustain films,television & music industry.

He said that the potential of entertainment business to earn foreign exchange for the nation is next to that of information technology business.He urged Prof. Sandeep Marwah to arrange to provide training in music in the academy.Earlier voicing his concern on the decline in respectful attitude of the youth toward mothers, the additional chief executive officers of Noida Dev Datta said Ujjwala’ s music album will go a long way in arresting this rot.Speaking on this occasion Ujjwala Sharma said that abiding faith in and bountiful mercy of the goddess mother had inspired her to create this music album.Member of the UP legislative assembly Surender Singh Nagar,income tax commissioner Manoj Mishra and senior Indian administrative service officer Anil Kumar also spoke on this occasion and felicitated Ujjwala Sharma. 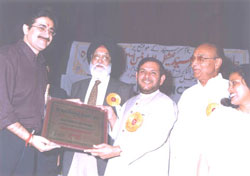 Asian Academy of Film & Television has been once again adjudged as the best film institute in India.It was indeed a proud moment for Prof. Sandeep Marwah to recieve the prestigious Sir Syed National Award 2001 in the august presence of Union Minister Sharad Yadav and Syed Shahnawaz Hussain,member of Parliament K.M. Khan and the former chief election commissioner of India M.S.Gill.This honour has been bestowed upon
Asian Academy of Film & Televison for providing excellent professional film education and training to the nationals of twenty eight countries of the world in the past eight years.Renowned cardiologist Dr. Naresh Trehan and famous fashion designer Ritu Beri were also among the selected few recipients of this awrd. 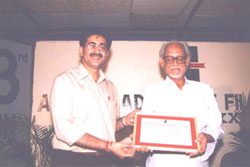 Former Principal of Film & Television Institute of India,Jagat Murari said that in many ways Asian Academy of Film & Television is much better than the govt.Supported Film & Television Institute of India.Addressing the students of AAFT he recollected the eventful days of the golden era of the film school he had once headed and admired the work done by FTII alumni like Subhash Ghai,Adoor Gopalkrishnan, Shatrughan Sinha,Jaya Bachan, and Shabana Azmi.Answering questions he said that good equipment does not automatically make good films and television programmes. He added that the artistic angle of production is very important.He advised the students to strive for excellence and originality in their work.Jagat Murari’ s address was by followed by a musical evening devoted to noted singer from Pakistan Shabbir Hussain who was invited by Prof. Sandeep Marwah to visit the academy.The noted radio and television artiste explained the finer aspects of the art of singing to the students and later kept them spellbound by rendering several of his popular songs and ghazals. 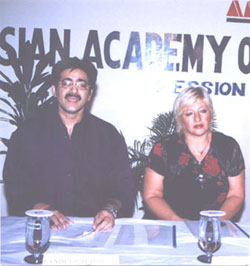 The well known filmmaker from the republic of Croatia Madame Ljubica Jankovic Lazaric,was invited by Prof. Sandeep Marwah to share her professional experience by conducting a weeklong workshop on ’ making of a documentary film’ at Asian Academy of Film & Television.Madame Lazaric is senior member of the Croatian Film Directors guild.She made extensive use of masterpieces of Croatian and Indian
documentaries to explain the art and craft of this format of films presentation.Incidentally,The governments of the Republic of Croatian and India have just signed on agreement under which the two countries shall mutually organise film weeks as well as encourage participation at film festivals organised in the other country in 2001 – 2003.The Republic of Croatian is a country of beautiful sea,mountains and plains and it offers unique locales shooting of films.This country has provided numerous writers,directors,actors and musicians to the world.Croatian stage is 150 years old.The Zegreb school of Animated Films is world-renowned.The local republic of Croatia mission has offered to make available films from their country for use as the teaching material to Asian Academy of Film & Television from time to time. 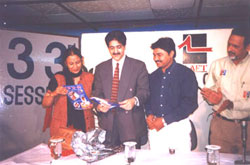 Addressing a large gathering at Asian Academy of Film & Television,Mr. Naresh Sharma,the editor of the monthly Magazine’ New Ad And Face’ said that total dedication to work coupled with the lessons learnt from the experience of seniors are essentials for achieving success in any field of activity.Reminding that while there is always time for everything in life,not a single moment should be
wasted on frivolous and flippant activities.Earlier,Prof Sandeep Marwah formally launched the second anniversary issue of this popular magazine.Mr Naresh Sharma disclosed that they propose to devote some space in the magazine to promote budding and talented film and television professionals. 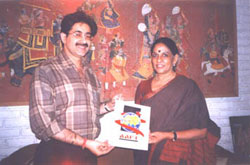 The president of Samata Party Jaya Jaitley visited Asian Academy of Film & Television while she was at Marwah Studios for a television recording. Jaya Jaitley is a television personality in her own right as she had anchored several programme for the women in the past. During their meeting Prof Sandeep Marwah told the distinguished visitor that the education and training being impartedat the academy aims at contributing to the advancement of the society in general as well as to prepare the students for work in the film & television industry. Jaya Jaitley congratulated the director for putting AAFT on the world map of film schools by imparting international grade education and training. She was pleased to know the AAFT’s cost effective training is not only top class but it is also the cheapest anywhere in the world. Jaya Jaitly told Prof. Sandeep Marwah that according to her assessment Asian Academy of Film & Television in indeed one of the best film schools in the world offering short term courses. 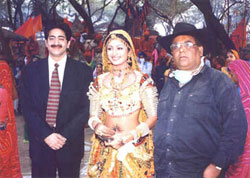 Few sequences of feature film Badhai Ho Badhai directed by Satish Kaushik are being shot at Noida and national capital region.Sets with rajasthani backdrop and some other facilities for shooting at the picturesque Surajkund have been provided by the,courtesy of MarwahStudios.Shilpa Shetty,currently rated as the best dancer by the film producers,is playing lead role in this film.Shilpa Shetty was in news for her dance number on the song ’ Main Ayi Hoon UP Bihar Lootne’ in feature film Shool.She lost her foothold on the acting career after ’ Baazigar’ and regained the same with her brilliant performance in Dhadkan.The tall and graceful Shilpa Shetty whose acting talent has been recognized by the film-makers is now all set to carve a niche for herself in the Indian cinema.In Badhai Ho Badhai she has been cast againest Anil Kapoor.Music for this film has been composed by Anu Malik.Beside Anil Kapoor,Shilpa Shetty is working with well known actors like Salman Khan, Sunny Deol, Sunil Shetty and Chandrachurd Singh in six different films.Sandeep Marwah was greeted by the cast and crew of the unit including Satish Kaushik and Shilpa Shetty when he visited the location to look at the arrangements made for the shooting.He said that some more sequences of Badhai Ho Badhai will be shot in the near future in and around Noida and it will be ready for release by the April next.Several past students of Asian Academy of Film & Television are working with Kapoor & Kaushik productions, which is making this feature film. 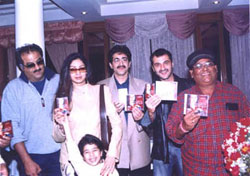 After the memorable 48th National Films Awards function, the music cassette of this year’s best film producer Boney Kapoor’s latest megaventure ‘Koi Mere Dil Se Poochhe’ was formally released. Beside Boney Kapoor, Sandeep Marwah, cinestar Sridevi, film actor Sanjay Kapoor and film director Satish Kaushik were also present. Many Mumbai & Delhi film & television personalities congratulated Boney Kapoor and wished success of the film on this occasion.AAFT alumni are also associated with the production of this film. ‘Koi Mere Dil Se Poonchhe’ has been scripted and director by Vinay Shukla. The lyrics for this film composed by Dev Kohli, Satyabhan Gupta and Ibrahim have been sung by Udit Narayan, Sonu Nigam and Hema Sardesai. The music for this film has been provided by Rajesh Roshan. Film actor Sanjay Kapoor will be seen in a powerful and all together different kind of role in this film. Jaya Bachchan, Aftab Shivdasani, Anupam Kher & Esha Deol are also playing important roles in this film. Incidentally, this is Esha Deol’s first film. ‘Koi Mere Dil Se Poonchhe’ is slated for countrywide release on the forthcoming 11th January 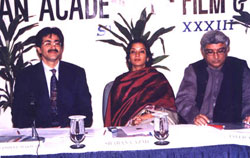 Noted film star, social activist and currently member of parliament Shabana Azmi urged the film and television producers to create gender equality through their work with a view to granting the women a place of pride in the society. She was delivering the valedictory address to the students of Asian Academy of Film & Television. Shabana Azmi has acted in more than sixty film so far. Besides two international awards,five national awards have been bestowed upon her for brilliant performance in feature films ‘Ankur’, ‘Earth’, ‘Khandhar’, ‘Paar’ & ‘God Mother’. She advised the outgoing students to take interest in all art forms and to minutely observe the life around them for doing their work. Conceding that it is debatable whether film making & television presentation can be taught at all, she said that she for one, is all for systematic training. However she added that learning process is never-ending and a lifelong one. Speaking on this occasion, well known lyricist and writer Javed Akhtar too emphasised the importance of training for film making and television presentation. Son of Jaan Nisar Akhtar, Javed Saheb had written the script for blockbusters like ‘Sholay’, ‘Deewar’ and ‘Janzeer’ etc. The coveted film fare award had been bestowed upon him on ten occasions – seven for the best the script and three for best lyrics. Javed Akhtar concluded his address by advising the students to always strive for excellence and try to come upto the expectation of the millions of viewers. Welcoming the distinguished guests Director of AAFT Prof. Sandeep Marwah presented the ‘Academy Award’ to the celebrity couple. Tanvi Azmi the wife of cinematographer Baba Azmi, also accompanied the celebrity couple.