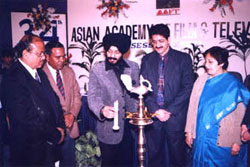 M S Bitta made a forceful plea for making an all out effort to root out terrorism from the Indian soil.He was participating in a seminar on ’ the role of media in fighting terrorism’ organised by Asian Academy of Film & TV. Enraged after visiting Jalianwala Bagh M S Bitta joined the polities at the age of 14. However, disillusioned by the decline in the standards and the decay of Indian political apparatus ,
he decided to form ’ Anti – Terrorist Front’ of which he is currently the chairman. Talking about the misuse of the right to information and freedom for expression, he said that some satellite television news channels are indeed harming the security and safety of the nation. Blaming the politicians for the crisis in the country, M S Bitta urged the film & television producers to try and create awareness through their work, about the danger from the enemies within the nation.Addressing the students the well known legal luminary Wasi Ahmed Normani pointed out that the root cause of terrorism are injustice, exploitation of the poor and weak and denial of human rights.He expressed his deep concern about frivolous and flippant programmes being telecast under the garb of entertaiment which are adversely influencing the impressionable minds. Former police officers Puran Chand pointed out that militants often target the helpless poor people to instil fear in the minds of people at large. In his opinion literacy among people and economic development will go a long way in eliminating the menace of terrorism.Intervening in the deliberations ,Prof. Sandeep Marwah disagreed with the general impression that films too are responsible for the decline of moral standards in the Indian society.The director of Shiva Institute of Management is Dr. Shefali Gautam remarked in the lighter vein that good management is the key to success in all human endeavour including militancy.

In his thought provoking and inspiring address the former union minister Syed Shahnawaz Hussain said that self confidence and self esteem are necessary ingredients for success in life. He was delivering convocation address at Asian Academy of Film & Television. Admiring the courage of conviction of Prof. Sandeep Marwah the former union minister conceded that formal education and training in performing arts including filmmaking and television presentation, is necessary. He advised the students community to be respectful toward their teachers and trainers and remain grateful to them for all that they do to prepare the youngsters to face up to what lies ahead in life. The youthful Syed Shahnawaz Hussain has the rare distinction of becoming a union minister at the age of 30. He had steered the affairs of more than one department of the central govt. including civil aviation. The well known painter Neeta Dogra, television performer Vipin Handa, social worker Anoop Khana and Satish Kapoor also shared their

Formally releasing the latest music album of the music composer and signer Pankaj Jeswani in a glittering function held recently at Marwah Studios in Noida Film City, the director of Asian School of Media Studies Prof. Sandeep Marwah described the talented artist as a god’s gift to the mankind. Music has universal appeal and it transcends geographical boundaries and linguistics barriers,Prof. Sandeep Marwah added.
Pankaj Jeswani had received training in classical vocal music from the famous Mondgal brothers at New Delhi. He had rendered songs in his voice for a number of feature films and television serials. He had regularly been performing in India and the overseas. Most of his numerous music albums had been well received by the music lovers. A number of awards have been bestowed on him for his outstanding contribution to music. After his the brief address, the talented artist mesmerised the audience with a number of songs sung in his melodious voice. Pankaj Jeswani accepted the life membership of International Film & Television Club on this occasion.

The renowned film director Satish Kaushik will be holding a screen-test at the famous Marwah Studios in Noida Film City on coming Saturday the 2nd September, to select actors for playing the lead roles in a feature film which he will be directing. Marwah Studios is known for lending support to the filmmakers by providing indoor and outdoor shooting facilities as well trained professionals including actors. The matinee ? idol R. Madhavan began his film career with the sequence of a feature film shot in Marwah Studios. Artistes like Kanika Maheshwari of BR Chopra’s film Virasat, Hena and Swati who played lead roles in the feature film Pyaar Ki Dhun, renowned TV director Kaushik Ghatak of Saas Bhee Kabhi Bahu Thee, Sanskriti and Sanjeevani fame had been trained at the world famous Asian Academy of Film & Television ? an offshoot of Marwah Studios. Satish Kaushik who had directed super hit films like Mujhe Kuch Kahna Hai and Hamaara Dil Apke Paas Hai in the past hopes that this well planned feature film will greatly entertain the local and the diasporic Indians alike.

The well known cine actor Sanjay Kapoor said that in addition to inculcating the ability to portray believable characters on the screen or stage, training for acting is greatly helpful in developing the necessary confidence to face an audience.
He was addressing the students of the world renowned Asian School of Media Studies and Asian Academy of Film & Television. Answering questions suave and handsome Sanjay Kapoor said he had been greatly influenced by the work of legendary Raj Kapoor. Conceding that a contact in the entertainment industry is helpful to a degree, the talented actor remarked that it only one’s professional competence which stands an individual in a good stead. He cited Shahrukh Khan to emphasise his views in the matter. Sanjay Kapoor further stated that like cutting and polishing a raw diamond, even the naturally born performing artistes require initial training.
Regular physical exercise, a proper diet and adequate sleep are necessary to keep an actor in good shape, he remarked.. Complementing Prof. Sandeep Marwah on making Asian School of Media Studies as one of the best Study Centres of Punjab Technical University in India, Sanjay Kapoor promised his full support to the students of this media school in Mumbai based entertainment industry.

Renowned film producer of popular films like Love In Nepal, Bharat Bhagya Vidhata, Return Of Jewel Thief, T P Aggarwal was the chief guest at AAFT’s inaugural function for start of its 52nd batch here recently. Congratulating the students on launch of their 52nd batch, he referred to the needs of the indian film industry mentioning that the entertainment industry that stood at Rs 35000 crores was poised to grow beyond Rs 85000 crores by 2010. Paramjit Singh of Golden Melodies, a well known organization engaged in promotion of new artistes and which has promoted artistes like Daler Mehndi and Mikka emphazized on the need of Training in Film and Television trade. Sonia mehta, a well known lawyer and an educationist representing Dien Ccarneige School of Motivation inspired the students with her invigorating address. Social worker Tirlok Sharma and renowned Painter Kishore Roy were also present on the occasion.

Senior cinematographer and president of WICA, Adeep Tandon was the chief guest at the Convocation Ceremonies for the 51st batch of AAFT at film city in Noida recently.
While announcing an open invitation to all the camera students of AAFT to become members WICA, Adeep Tandon, who has been associated with successful films like Saraansh, Thikaana,……, said that AAFT could be compared with any of the best available institutes of Film and Television Training in the world today and that he was immensely impressed with its standards of excellence in all walks of education and training.
Addressing the audience assembled, Adeep shared a number of his valuable experiences from the film industry especially for the benefit of the passing batch. Renowned singer Altaaf Hussain from Afghanistan, present on the occasion said that he was indeed highly moved by the Guru Shishiya prampara so evident at the two institutes. Well known journalist and a TV personality today; Santosh Bharti, former Engineer in Chief (Doordarshan) R K Gupta, Dr Loveleen Thadani, a former student of AAFTand now a well known producer director of films also addressed the students on this occasion.

Gil Alon, renowned zen master, singer, actor and theatre director from Israeil and Tammy Benhaim, Academic and Cultural affairs Head of the embassy of Israel in India were recently the distinguished guests of honour at ASMS/AAFTA. The duo graced the institutes at a seminar and an interactive program organized by AAFT & ASMS jointly on Culture Exchange in all facets of film, television and theatre productions between the two nations.
A large faculty representing both the institutes participated in the seminar. Gil Alon handled each and every question fielded to the distinguished guests with great aplomb. On behalf of ASMS and AAFT, Dean AAFT, Prof A K Guha, Prof Satish Garg and Prof Suresh Jangida briefed Mr Gil Alon with the fast changing trends in the field of film and television production in India.
Tammy Benhaim invited Prof Sandeep Marwah to Israeil on the occasion of the forthcoming Israeli Film Festival and also threw open her offer of collaborations with the Israeli film schools for both the ASMS and AAFT.
Both the guests were also presented with the prestigious life memberships of AAFT’s International Film and Television Club by Prof Sandeep Marwah before a formal vote of thanks

The noted and upcoming film actress Neetu Chandra stated that a film
professional has to be enthusiastic as well as hard working. She was
addressing the students of Asian School of Media Studies and Asian
Academy of Film & Television.
The actress who had a box office hit
Garam Masala – Complemented president of the two institutions Sandeep
Marwah, she said media schools indeed prepare actors and filmmakers to
face the challenges of the industry with confidence.
There was a huge pomp and show and the National Press was also a part of the event. For
her future projects Madhur Bhandarkar has singed her for his forthcoming film Signal. She is also doing a movie with Shahrukh Khan. She accepted the life membership of International Film & TV Research Center.