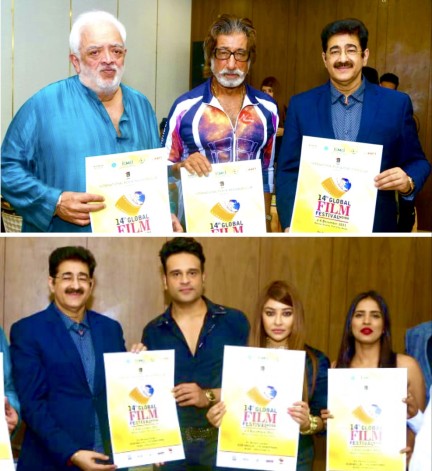 Mumbai: The first poster of forthcoming 14th Global Film Festival Noida 2021 was released here by the renowned film personalities in a grand function organized by the Chairman of Coordination Committee of ICMEI- International Chamber of Media and Entertainment Industry. Mumbai & film producer Rajeev Choudhary at Celebration Club in Mumbai.

Films are the best way to capture the art and culture and are also the ambassador of culture of any country, whereas the festivals are the marvelous way to showcase the same. We have been conducting large number of festivals round the year but the most famous is Global Film Festival Noida. GFFN has become popular after IFFI changed its base to Goa from Delhi,” said Sandeep Marwah President of Marwah Studios and GFFN in a function to release the poster.

The poster was jointly released by renowned actor such as Shakti Kapoor, Krushna Abhishek, Payal Ghosh and film director Rahul Rawail. “We are proud of Marwah Studios for conducting so many festivals round the year and inviting film makers from all over the World. It is the real international integration,” said Rahul Rawail. “It will be great to be the part of the festival this time,” added Krushna Abhishek. First Poster of 14th Global Film Festival Noida 2021 Launched.