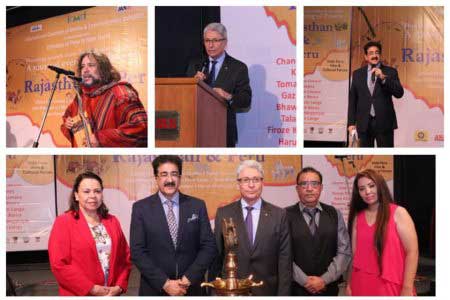 Noida: International Chamber of Media And Entertainment Industry in association with AAFT University and Embassy of Peru had a great musical evening at Marwah Studios.

It was a rare occasion of amalgamation of music by Rajasthani group by Gazi Khan Barna and Peruvian music group consisting of Chano Diaz Limaco, Kito Linares Bazalar and Tomás Diaz Limaco.

A two hours musical extravaganza not only impressed but mesmerized the audience. “I take this opportunity to thank H.E. Carlos Polo the Ambassador of Peru to India for bringing such a talented artist from Peru. The jugal bandi was too good to express through words,” said Dr. Sandeep Marwah President of the Chamber. Dr. Sandeep Marwah presented the Patron ship of Indo Peru Film And Cultural Forum to H.E. Carlos Polo.

”I am happy to be here which is also the birthplace of Indo Peru Film And Cultural Forum almost 11 years back. I appreciate the deep interest and dedication of the team of Marwah Studios. We promise to work together for the promotion of art and will create more awareness of Indo Peru Culture,” said H.E. Carlos Polo.

Ambassador presented a certificate of appreciation to Dr. Marwah for his untiring contribution to Indo Peru art promotion. Later the whole team was presented with the life membership of   Film And Television Club of AAFT.