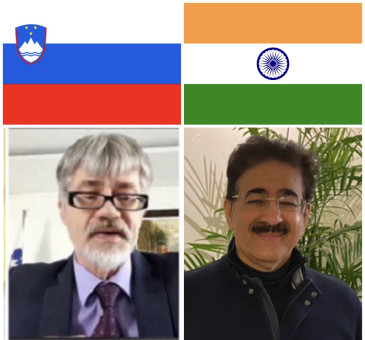 New Delhi:26th Dec: “I take this opportunity on behalf of ICMEI, complete media and entertainment industry and art and culture fraternity of India to congratulate H.E. Dr. Marjan Cencen Ambassador of Slovenia to India and the people of Slovenia on the auspicious day of Independence Day & Unity of Slovenia which falls on 26th December,” said Dr. Sandeep Marwah President of International Chamber of Media And Entertainment Industry.

“It is almost seven years we are working in hand to hand with the Embassy of Slovenia and Indo Slovenia Film And Cultural Forum is one of the most active forums in Delhi. They have been our partners in every International event like Global Film Festival, Global Fashion Week, Global Festival of Journalism and Global Literary Festival,” added Dr. Marwah also Chair for Indo Slovenia Film And Cultural Forum.