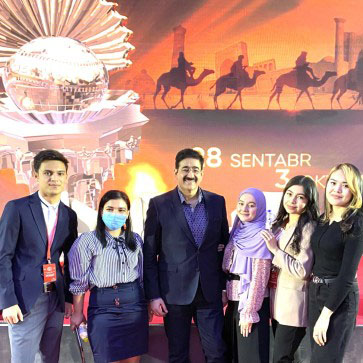 Tashkent: “!986 I designed this project of Noida Film City, 1987 it got its clearance, 1988 allotments were made and 1991 the first studio of North India under the name and banner of Marwah Studios came into existence and no looking back,” said Sandeep Marwah President of Marwah Studios in a master class talking about his journey and Indian Film and Television Industry of India at Tashkent International Film Festival in Uzbekistan.

“Talking about the scale of Indian media and entertainment Industry Marwah informed that India is the largest film producing country in the World. “We make 2000 feature films in 28 official languages. There are 10,000 theatres and approximately 15 million people watch cinema every day. We sell 5 billion cinema tickets every year. Nearly 10 million people are working in media and entertainment industry. This is the sixth biggest industry in the country. We have 950 Television Channels, 325 Radio Stations ad 40,000 Newspapers and Magazines. The turnover of our industry is touching 1400 billion rupees and expected to be 1800 billion rupees by end of next year,” informed Sandeep Marwah answering many questions from the audience.

Noida Film City is growing very well. We have 16 studios; 350 Channels being broadcast to 162 countries. 17000 media professionals are working here, and cascading effect is that 150,000 people are earning their bread from this city.

Marwah Studios has churned out 4500 television programs for 50 channels, being associated with 125 feature films and made around 5000 training films. Asian Academy of Film and Television the first private film school of the country educated and trained 19000 media professionals from 145 countries of the World and given largest number of celebrities to India.

Marwah Films and Video Production has produced 3000 short films and given opportunity to more than 10,000 media professions to make films at the cost of studios. Marwah studios has given 10 major festivas in a year to the Glamour World including Global Film Festival, Global Literary Festival Global Festival of Journalism and Global Fashion Week where Uzbekistan has also been partner every year.

Sandeep Marwah answered all the questions asked by young film makers. Marwah also invited them to join Indo Uzbekistan Film and Cultural Forum for more benefits from Marwah Studios. The event was coordinated by Shahrukh Mirza.