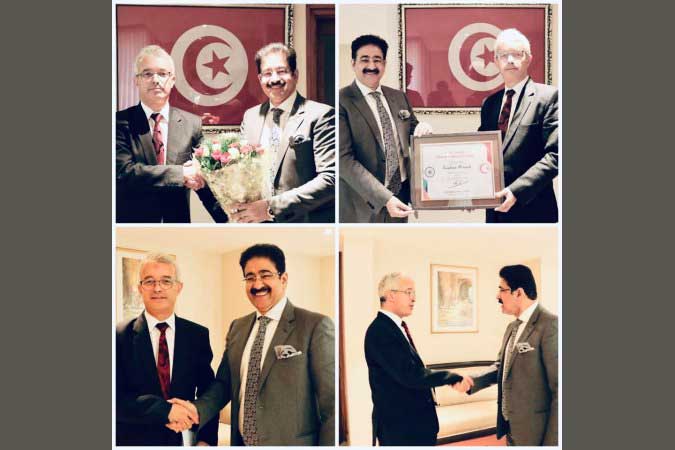 New Delhi: H.E Nejmeddine Lakhal the Ambassador Extraordinary & Plenipotentiary of Tunisia in India has been presented with the Patron ship of recently formed organization under the name and banner of Indo Tunisia Film And Cultural Forum by Dr. Sandeep Marwah at Embassy of Tunisia at New Delhi.

“We are proud to be associated with   Embassy of Tunisia in India and it is our privilege to present the Patronship of ITFCF-Indo Tunisia Film And Cultural Forum to H.E. Nejmeddine Lakhal. Under his guidance we will be able to promote better relations between India and Tunisia,” said Dr. Sandeep Marwah President of International Chamber of Media And Entertainment Industry.

“I am pleased to be the Patron of ITFCF, I congratulate the team of ICMEI for taking such a beautiful initiative to develop relation between two countries,” thanked H.E. Nejmeddine Lakhal.

H.E. Nejmeddine Lakhal was earlier Adviser to the Minister of Foreign Affairs, 2014 he was In charge of the directorate of multilateral cooperation. In 2012 he was appointed as Deputy Director for multilateral cooperation. In 2012 he acted as Deputy permanent representative, Mission of Tunisia to the United Nations (New Work). In 2007 he was Counsellor for political, press and cultural affairs and Deputy Chief of mission at Embassy of the Republic of Tunisia, Ottawa.