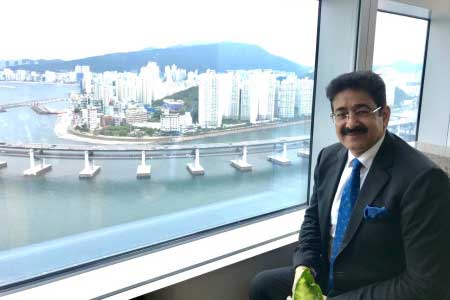 Busan: The Managing Director of National Federation of Tourism And Transport Cooperatives of India Limited Dr. Sandeep Marwah visited Seoul and Busan in Korea to understand the fast rise in Korean Tourism.

“It is hard to believe that a country which was almost last in the list has risen so fast to an international standards and now been called the developed Nation,” said Dr. Sandeep Marwah talking to the press at Hotel Premier Centum at Busan.

“The best part of the country and country men is that they are very patriotic and nation concerned. Not only they talk but every individual is involved in proving the same,” added Dr. Marwah.

A high time for all of us in India to get connected to our works and be honest to our profession to attain success in the near future. There is a big potential in the country if countrymen love their country.

Busan is South Korea’s second most-populous city after Seoul, with a population of over 3.5 million inhabitants. It is the economic, cultural and educational center of southeastern Korea, with its port—Korea’s busiest and the fifth busiest in the world.