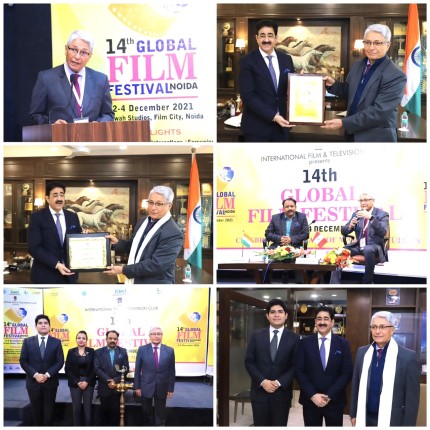 Noida: One of the popular films- ‘Mataindios’ from the land of Peru was the special entry to the festival which was formally inaugurated by H.E. Carlos Polo Ambassador of Peru to India on the first day of Festival with house full show.

“I on behalf of the 14th Global Film Festival Noida 2021 welcome the Peruvian Film to the festival and our heartiest thanks to the Ambassador for formally inaugurating the screening of the film,” said Sushil Bharti Co-Director of the festival.

“The Peruvian cinema has grown bigger in last few years. Some of the best films have been produced and have done well commercially within the country itself. It is a great honor to be part of this international festival and talking about Peru culture through films,” said H.E. Carlos Polo Ambassador of Peru to India.

Later Dr. Sandeep Marwah Presented Patronship & honoured H.E. Carlos polo Ambassador of Peru with Hindi Cinema Samman for promoting Hindi Cinema in his country.” We are connected to Peru now for a long time. Indo Peru Film and Cultural Forum has been involved in large number of activities to promote relation between India and Peru,” Dr. Sandeep Marwah thanked Fabio Subia Second Secretary and In charge Culture for taking special interest in the festival.