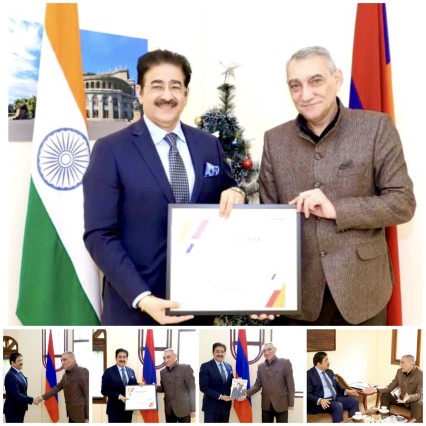 New Delhi: “We are more than happy to honor Dr. Sandeep Marwah President of Marwah Studios and Chair for Indo Armenia Film and Cultural Forum for his untiring contribution towards building relation between India and Armenia through art and culture,” said H.E. Youri Babakhanyan Ambassador of Armenia to India while presenting Certificate of Appreciation to Dr. Marwah in a small ceremony at Embassy of Armenia.

Indo Armenia Film and Cultural Forum has been part of every activity of International Chamber of Media and Entertainment Industry since then including Global Film Festival, Global Festival of Journalism, Global Literary Festival, Global Fashion Week etc.

“I am so touched by the gesture of H.E. Youri Babakhanyan Ambassador of Armenia to India. This has motivated me to think more innovative as far relations are concerned with Armenia,” said Dr. Sandeep Marwah while accepting the Memento.