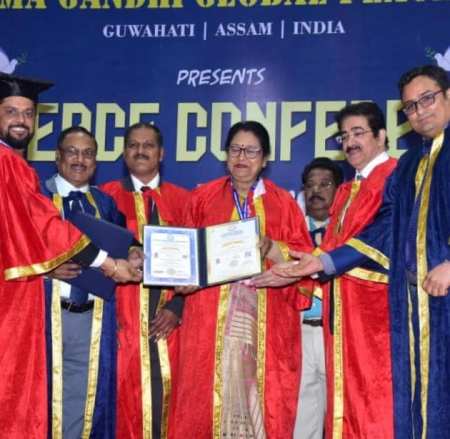 Guwahati: Sandeep Marwah President of Marwah Studios now Chair for more than 100 social, Educational, Art, Culture, Film, Television, Media and various other bodies, has been nominated and conferred upon a Doctorate in Social Work for his continuous support, help and deep involvement in uplifting the society from various platforms.

“Sandeep Marwah has been on the path to Raja Rajmohan Rai, Nelson Mandela, Swami Vivekanand, Mahatma Gandhi and has achieved what many people may not even think. His love for country and for human progress cannot be expressed in words. He deserves to be honored with Honoris Causa-A Doctorate in Social Work,” said Dr. P Mannnuel Vice Chancellor of Global Human Peace University at Rang Bhawan, Maligaon in Guwahati, Assam.

“What a pleasure and honor to honor Dr. Sandeep Marwah. He has proved what one sinle person can do for the human race. He deserves more, people like him need to be appreciated . They are the real source of inspiration,” added Queen Oja Member Parliament from Guwahati presenting Degree to Marwah.