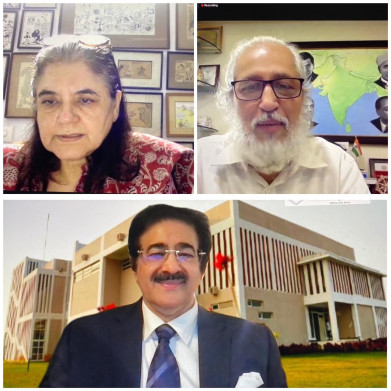 New Delhi: “I have been noticing AAFT and Sandeep Marwah from last thirty years how he has grown from strength to strength and emerged as one of the best institutions in the country, definitely he deserves this prestigious award,” said Meneka Gandhi Member Parliament and Former Union Minister Government of India in an Education Summit and Award Function organized by ObserverNow online.

“Sandeep Marwah is seven times World Record Holder and has been nominated by 54 countries of the World as their cultural representative. His untiring contribution to films, television, media, art and culture education cannot be ignored at any stage of time. AAFT University is one of the most exclusive Universities of the Country to promote creative arts. Dr. Marwah is a case study in 27 countries of the World,” said Tanya the Editor in Chief of ObserverNow.

“I am thankful to the dignities for their blessings and organizers for the award. I can assure you that at AAFT we have left no stone unturned to make all these creative courses very useful and interesting. We have touched 145 countries so far and students are creating wonderful name for themselves in their chosen fields,” said Sandeep Marwah Chancellor of AAFT University.