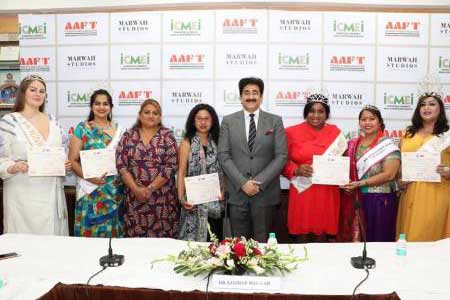 Noida: “You can have anything you want in life if you dress for it. Fashion is about dressing according to what’s fashionable. Style is more about being yourself. I think there is beauty in everything. What ‘normal’ people perceive as ugly, I can usually see something of beauty in it,” said Kunal Rawal in his speech to the young and new aspirants of design industry at the inauguration of new session of AAFT School of Fashion And Design.

Youthful and highly acclaimed menswear designer Kunal Rawal got his qualifications from London College of Fashion (LCF) with a specialization in merchandising. He did his cinema course from AAFT- Asian Academy of Film And Television. He is the youngest designer in history to make a debut at Lakme Fashion Week.

Kunal Rawal launched his label ‘Dstress’ in the year 2006, having his signature designs best described as “cultivated imperfection.” He has also designed outfits for IPL cricket teams Rajasthan Royals and Royal Challengers Bangalore, which comprised of fashionable active wear for off-field events.

The session was followed by question answers by students and later Dr. Sandeep Marwah honored Kunal with life membership of International Film And Television Club of AAFT. Director Ritulal paid vote of thanks.